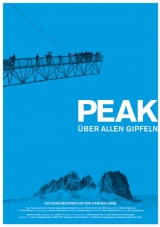 Peak looks at the world of alpine ski tourism and reveals what is normally hidden beneath the thick layer of artificial snow: the modification of the landscape and the enduring traces that humans have left on it. At the same time the viewer also experiences the difficulties of surviving in the Alps when the weather has become unpredictable.

A discussion with director Hannes Lang will follow the screening.