Members of the ITN Network RECOMS

The RCC welcomes Lauren Collee and Talitta Reitz, two early stage researchers, to the Rachel Carson Center. Both are participating in RECOMS, Resourceful and Resilient Communities, a new Marie Skłodowska-Curie (MSCA) Innovative Training Network (ITN) funded by the European Commission. The program is comprised of a transdisciplinary consortium of scientists, practitioners, and change agents from eleven public, private, and nonprofit organizations located in six European Union countries. The transdisciplinary approaches of the individual doctoral projects will concentrate on social-ecological challenges.

Lauren Collee has a bachelor's degree in English and French from Oxford University and a Master of Science in Science Technology Studies (STS) from University College London. Her studies in these two areas combined fed her interest in the ways in which narratives can be a tool for uncovering layers of meaning in landscapes. Her master's thesis examined the ways in which migratory seabird populations disrupt different human narrative constructions of the island of St Kilda off the west coast of Scotland. While living in London, she worked first for an organization aiming to reduce e-waste through community repair, and subsequently for a political writing prize for young people. Lauren's interests outside of her research include creative writing and woodblock printmaking. Her writing and prints have been featured in a number of small-press literary magazines.

Talitta Reitz received her bachelor's degree in architecture and urbanism from the Federal University of Parana, Curitiba, where she developed an interest in green cities. She did her master’s degree in landscape architecture and urbanism at the University of Southern California, Los Angeles. At USC, she also received a certificate in heritage conservation. Her thesis was a comprehensive study of pressing environmental issues in the Central Valley in California. Her design research proposed an urban forestry network as a response to the problems caused by nature deficit disorder amongst children. During her master’s, she was part of a project using participatory design methods for creating a park in USC Park Campus neighborhood. She received an award from the American Society of Landscape Architects and the Tau Sigma Delta Honor Society for Architecture and Applied Arts.

Lauren and Talitta will travel to Vaasa, Finland on 16–23 September where RECOMS will hold its first training session. For the first time, all early stage researchers, together with their mentors from seven institutes and the four partner organizations will discuss the network as a whole as well as specific topics on resilience and resourcefulness, gender, identity, and intersectionality. The training will also focus on professional and personal skills of project management, leadership, career planning, team work, and creative thinking. 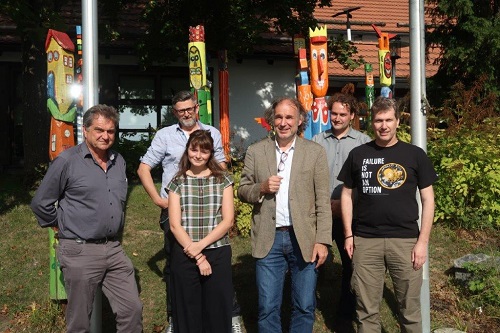