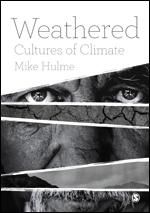 Weathered: Cultures of Climate explores how climates are historicized, known, changed, lived with, blamed, feared, represented, predicted, governed and, at least putatively, redesigned. Climate is an enduring idea of the human mind and also a powerful one. Today, the idea of climate is most commonly associated with the discourse of climate change and its scientific, political, economic, social, religious and ethical dimensions. However, to understand adequately the cultural politics of climate change it is important to establish the different origins of the idea of climate itself and the range of historical, political and cultural work that the idea of climate accomplishes.

Mike Hulme worked on Weathered during his fellowship at the RCC in 2014.