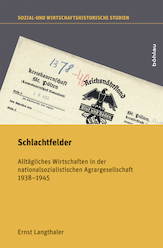 Carson fellow Ernst Langthaler has recently published a pioneering study on farming in Nazi Germany: Schlachtfelder. Alltägliches Wirtschaften in der nationalsozialistischen Agrargesellschaft 1938-1945. Taking the province of Niederdonau in German-annexed Austria as an example, the monograph focuses on the multiple ways in which rural actors struggled for resources such as land, labour, capital, knowledge and products between themselves and with political-economic authorities under the conditions of dictatorship and warfare. An open access version of the book is available here.