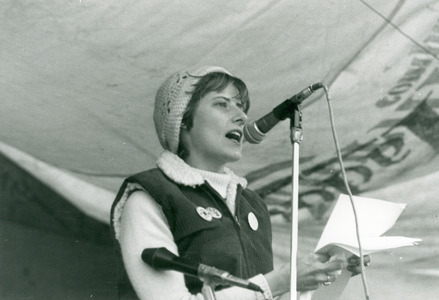 Petra Kelly, social activist, co-founder of the West German Green Party, and recipient of the Right-Livelihood Foundation’s Alternative Nobel Prize, has been the subject of renascent popular interest. A recent novel has dramatized her life, she features prominently in histories and documentary films. She has also become an important figure for ecological activists in many parts of the world.

Interest in Kelly is well suited to a world beset by a rapidly escalating climate crisis, which reinforces the need to think—and to act politically—beyond borders. The interlinking of grassroots struggles, the celebration of bottom-up activism, and a growing reliance on indigenous knowledge, all contain echoes of Kelly’s politics. Kelly advocated an alternative, holistic politics based in nonviolence and love. Her biography spanned the Atlantic inspiring her to see emancipatory struggles all over the world as interlinked. Her prefigurative approach entailed a close connection between words and deeds, causing her to back Bundestag speeches up with direct action protests on the floor of the parliament, across the Iron Curtain, and around the globe.

Were she still alive, Kelly would turn seventy-five in November 2022. The upcoming anniversary of her birth offers an important opportunity to remember Petra Kelly and to reassess her pathbreaking political career, but also to consider why her life and legacy are gaining meaning in the present. Our conference seeks to place Kelly and her career in this larger context. We invite proposals for papers based on empirical research into her life and ideas, but also for papers addressing Kelly through the lenses of public memory, cultural production or contemporary political debates.

To address these interests, we will organize the discussions at the conference around the following four sets of questions, which emphasize Kelly’s conceptions of politics and ecology, her transnationalism, and the meaning of her political work and her legacy in the present:

1. What was Kelly’s understanding of politics, and what were her political objectives? What were Petra Kelly’s contributions as a “global political theorist” (Bevan 2001), and how did her ideas and approaches develop in conversation with—or in contradistinction to—other critiques of establishment politics in the 1970s and 1980s? How can we use Kelly’s political ideas and legacy to think about pressing contemporary questions, such as the relationship between the climate movement and the political parties, or the place of social movements and populist parties in contemporary parliamentary politics?

2. What was the meaning of ecology for Kelly and for other activists with whom she collaborated? How did she link interests in ecological issues with peace, feminism, and human rights? To what extent did Kelly’s brand of ecological thinking differ from the environmental politics of established political parties? What role do hope and visions of the future play in Kelly's approach to ecological crises?

3. How should we make sense of the transnational politicization and political career of Petra Kelly? What sorts of transnational networks, groups, and exchanges did Kelly participate in, and how did Kelly and her interlocutors characterize these interactions? To what extent was awareness of politics beyond the national framework important for her and for other activists in the 1970s and 1980s? Why were Kelly’s politics, her activism, and even her person received so differently in different places, and what have these different receptions meant for her legacy?

4. How should we understand Kelly’s place in contemporary public discourse and the political imaginary, and how has her place differed in Germany and elsewhere? Do the ideas advocated by Kelly and other alternative thinkers in the 1970s and 1980s offer us meaningful perspectives on contemporary problems and challenges? How does the emergence of a new generation of environmental movements, and the climate justice movement in particular, lead us to rethink the life and legacy of Petra Kelly?

In close cooperation with the Petra Kelly Foundation and the Heinrich Böll Foundation, the organizers are preparing a program of public events that will complement the conference. Conference participants will be invited to take part in these events. More details will be announced closer to the conference date.

If you have any further questions, please don’t hesitate to contact us:
Andreas Jünger (andreas.juenger@rcc.lmu.de)
Stephen Milder (stephen.milder@rcc.lmu.de)